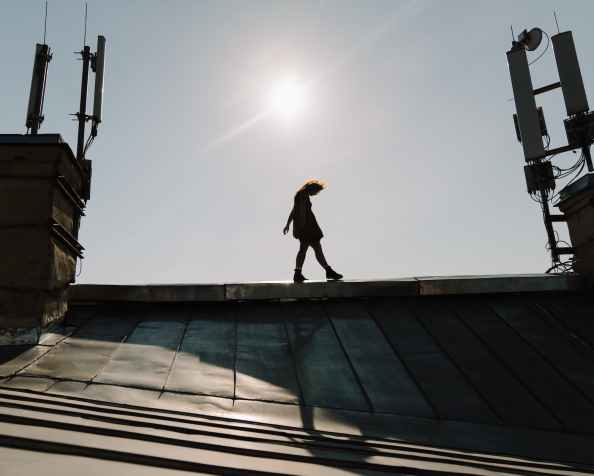 ‘Forget about the tunnels,’ Lori said.

Gabriel rubbed his face with both hands.

‘I can’t. I can feel them under my feet all the time.’

‘That’s your imagination. For all you know, there aren’t any more than the one you went down into.’

‘Then you need to feel something else. Drink up and come with me.’

The were in the Has Bean Cafe on a Saturday morning in June. At just after nine, the place was quiet, only a couple of other customers. Gabriel drank the last of his cappuccino and ate the remaining chocolate-sprinkled froth with the coffee spoon, not hurrying because he was a little afraid of whatever Lori had in mind.

‘This isn’t another of your weird friends, is it?’ he asked, scraping the bottom of the cup with his spoon, not looking at her.

‘You are one of my weird friends,’ said Lori, ‘and don’t you forget it.’

Gabriel smiled and got up, ready to follow wherever she took him.

They headed up the hill, and the Dark House loomed at the top. Gabriel became less enthusiastic — he did not want to go there again. Lori turned left at the top of the hill and they walked away from that house. For a while Gabriel felt as though it was watching him. He looked back, but saw no-one at its windows. His preoccupation meant that he did not recognise their destination until it was too late.

Lori stopped at a big old house that was divided into flats and rang the bell for number 6. After a couple of minutes the door was opened by a pale man in his early thirties. He looked pleased to see Lori, but when he noticed Gabriel a shadow passed over his face.

‘Hello Rob,’ said Gabriel, affecting a cheer he did not feel. ‘How are you?’

Rob did not reply, except for a slight shake of the head. Gabriel had been avoiding him for months. After what had happened there was a deep well of complicated feelings that Gabriel preferred to avoid looking at.

Rob held the door half open for a moment or two, but then made the decision to let them in. They followed him up to the top floor flat and into his living room. He offered them coffee. Gabriel was about to decline, but Lori accepted for both of them, and when Rob was out of the room she started to explain.

‘He’s been having some trouble he thinks is a haunting,’ she said.

‘Why did you bring me? I’m no ghost hunter.’

‘No, but the problem is on the roof, and you are an experienced rooftopper.’

‘Not any more,’ said Rob, bringing in two mugs of what was clearly instant coffee. ‘Not since…you know.’

Not since Frida’s accident, he meant. Gabriel tried no to think too much about that. There were no photos of her in the flat, but he supposed it might be too painful for Rob to look at images of her when she was full of life and the spirit of adventure.

‘So what’s on you roof?’ Gabriel asked, hoping to head off any awkward moments.

‘The landlord says it’s just pigeons,’ said Rob, glancing out of the window, ‘but it isn’t. I don’t know what it is, but it’s driving me crazy. Help me get rid of it.’

The flat was built into what had been the attic servant’s quarters in the building’s past, and it was directly under the roof with sloping ceilings and small dormer windows.

‘Well,’ said Lori, ‘now we just wait until something happens.’

Gabriel took a sip of his coffee, grimaced, and walked over to the window to see what the roof was like.

‘There’s a skylight in the bedroom you can use to get out there,’ said Rob. ‘I’ll get the stepladder set up.’

When Rob was out of the room again, Gabriel said, ‘Shouldn’t we be here at midnight or something?’

‘No,” said Lori. ‘This is a daytime manifestation.’

‘It probably is just pigeons, or his imagination. You know what happened to his girlfriend?’

Gabriel agreed, thinking that the least he could do was to humour everyone. When Rob had the ladder set up, Gabriel climbed it, opened the skylight and assessed the roof for climbing possibilities. He had clambered across worse in the dead of night, so he had no worries. the rest was just waiting. They drank their unpleasant instant coffee, Gabriel suspecting that it was the cheapest off-brand stuff, and made limping attempts at conversation, always avoiding the only things Rob and Gabriel had in common — urban exploration and Frida.

There came a point when the fourth invisible presence in the room became too much for Gabriel and he suddenly rose to his feet and began to pace up and down the small living room. the others stared at him.

‘Too much caffeine,’ he said, shaking his arms and flexing his fingers. Then he sat down again, trying to be still and to feel a little sympathy for this man he now realised he did not like at all.

Why? Rob took Frida away from the Urbex community. They did their own things as a couple, which was theoretically okay, but Gabriel thought that Frida lost some of her sparkle, and she would not even stop for a chat in the street, let alone meet up with her old friends. When he came back to the moment, Gabriel realised that Lori, with her usual fearlessness, was broaching the very topic he had been trying so hard to avoid.

‘I was so sorry about your girlfriend’s accident,’ she said. ‘That must have been hard to bear.’

‘Thank you,’ he said, with a little choke in his voice. ‘It was terrible. I had no idea she’d gone out on her own like that’

He looked at Lori mournfully, moisture glistening in his eyes, then he noticed Gabriel watching and his expression turned to irritation. Lori was about to say something more when there was a scrabbling sound above them, outside on the roof. They all looked up, as if they would be able to see through the ceiling.

Something was moving over the roof, pausing here and there to scratch at the tiles. It was nothing like any bird noise Gabriel had ever heard. He got up and went to the bedroom, with Lori following.

He eased himself out of the window and took a good look around the roof. At first he saw nothing, but then he noticed a dark shadow by the chimney pots.

‘Looks like a bird,’ he called down to Lori. ‘A really big bird. I’ll see if I can get a better look.’

He pulled himself up onto the ridge of the roof and began to move towards the chimneys. The bird did not retreat or fly away, but began to approach him. No — not a bird. What was it? He struggled to make out a proper shape to the thing. Gabriel tried to focus but it was impossible — and then it was on him.

There was a hand on his face, pushing him. He thought it was a hand. Grabbing at the ridge tiles he tried to hang on, but the force was too strong, and filled with malice. Losing his hold, Gabriel slid down the roof and over the edge, falling through empty air, a long time falling, with someone else’s memories flowing through his mind, ending with a dreadful crack. Then nothing.

He opened his eyes.

He was still clinging to the ridge tiles. Lori was calling to him, ‘Are you all right?’ There was nothing on the roof with him now. It took a minute to begin to understand what had happened, and before he could safely move.

Lori was halfway out of the skylight.

He was not okay, but he managed a tight smile, and started to make his way back down to the skylight, every muscle in his body trembling. Not until his feet touched the bedroom carpet did he feel any relief.

‘What was it?’ asked Rob, but took a step back when Gabriel turned to answer him.

Gabriel took a few steps towards Rob and put his hand on the man’s face, pushing.

He gave Rob a violent shove that sent him falling backwards onto the floor.

‘You were up there with her that day, weren’t you?’ said Gabriel, trembling with rage now.

Rob shook his head and held his hands up protectively.

‘We’d better leave,’ said Lori, and Gabriel did not argue in the face of his strong desire to beat Rob senseless.

He was cut off by the slamming front door.

Later, when Gabriel had calmed down enough to explain what had happened to him, Lori asked ‘What shall we do?’