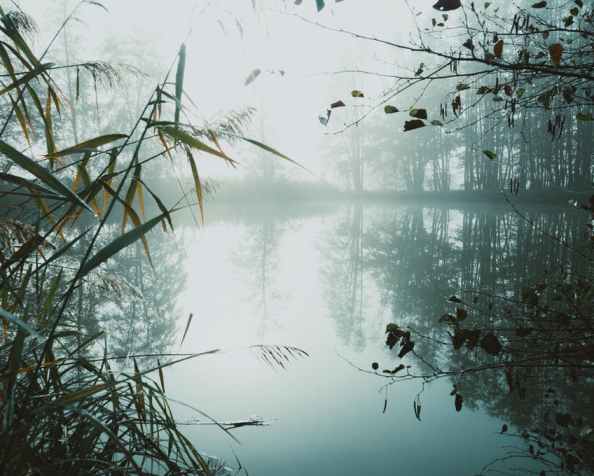 The Shuckleigh Women’s Wild Swimmers were rebels, lawbreakers. You could deny them permission to swim in your bit of water, but they would do it anyway.

This lovely lake was part of the old Mosse estate, and was strictly off limits to all swimmers. Sure, there had been past drownings, but what stretch of water has never had someone drown in it? The women of the club swam everywhere, and always had an eye to safety, knew what they were doing, and were all strong swimmers — and were very buoyant, too, most of them. Something to do with cake, no doubt.

Maureen was the treasurer, a post which required no more than collecting a small contribution from each member towards the cost of the apres-swim cakes, and the purchase thereof. It was she who had suggested this lake for their next swim. They asked permission, of course, but received only a simple refusal without explanation, except that the lake was dangerous.

‘How can it be dangerous?’ said Elly, the club secretary. ‘It’s not that deep, there’s no outflow to cause currents. I don’t know what he means.’

‘It’ll be the mere-maid,’ said Nelly, the oldest member, tiny, white-haired, and with a headful of local stories.

‘Mere-maid, like the pub. She’s supposed to guard a treasure in the lake, and sometimes appears to young men, luring them to a watery death with the promise of her beauty.’

There was general hilarity, laughter spreading in waves through the cafe where they were meeting, breaking over the heads of the other, disconcerted customers, along with cries of ‘She won’t be interested in us then!’, and ‘Unless she likes ladies too!’, followed by many dirty jokes about the sexual leanings of mermaids. Several customers drank their coffee and left.

Now, with the waters of the lake lapping at her ankles, Maureen felt an unfamiliar sense of unease. the lake looked far deeper than it was supposed to be, the waters black in the early morning light.

Elly and Nelly and half a dozen others were already up to their waists in water, chatting and giggling, but quietly, since they were here without permission, trespassing with intent to swim.

Maureen watched the others plunging into the water, striking out towards the centre of the lake. It did look good, but there was something else she could feel, creeping up from her chilling feet through her bloodstream to her heart.

‘I’m not brave enough,’ she thought, and then wondered where that had come from. ‘Buck up,’ she told herself. Pushing aside all anxiety, she waded in, feeling the silty, slimy mud oozing between her toes. Stretching forward, she plunged into the water and breast-stroked her way towards the others.

In the middle of the lake she paused, resting in the water, sweeping her arms gently around her, feeling the silky liquid passing through her fingers. The others were swimming nearby, breaststroke, backstroke, crawl. Maureen’s thoughts drifted away into nothingness and she found the great peace of an empty mind for a moment.

Then something brushed against her leg. It felt like a hand. One of the gang playing tricks. She scanned about to see who was missing, but they were all in sight, and besides, not one of them was noted for their underwater swimming skills. Probably just a fish. Or the mere-maid. She laughed, and began to swim. Again, a hand brushed her leg. She stopped and pulled herself into a ball, which caused her to tip face-forwards into the water. Floundering, she opened her eyes and saw, down in the dark brown water below, a pale face looking up at her. She thought it was a corpse floating there, suspended below the surface somehow, dark eyes open — but the face smiled at her, the eyes widened.

It is not advisable to scream underwater, but she tried it. Tannic liquid in her mouth advised her otherwise and she reared back to the surface, gasping in air.

She was not sure that she had seen what she imagined, and nobody was close enough to speak to. Maureen began to swim towards the shore, afraid of what might be below. For speed, she was doing the crawl, not her best stroke. She had not gone far when, on the downstroke, her left arm was grabbed and she was pulled to a stop. This time she screamed in the air, and then managed to pull in one last deep breath as she was dragged under.

Down, down, how deep was this lake? She thought of the cake and flasks of hot tea waiting in her car, she thought of home, then she forgot all of that.

The mere-maid was leading her down, the grip on Maureen’s arm strong and unrelenting, but it was not dark down there. Black streams of the mere-maid’s hair obscured Maureen’s vision, but would drift aside to show wonderful things, all ablaze with light.

She forgot about the bother of not being able to breathe underwater, filled with elation at the great blooming of truth she saw below.

Someone grabbed her trailing hand. There was a short tug of war for possession of Maureen, then the mere-maid let go, gazing after her with sorrow in her eyes. ‘No,’ said Maureen as the vision faded.

Choking up water, lying on the grass with towels thrown over her and Elly pumping away at her chest, she gasped back into the ordinary world. All the women in bathing costumes and one angry man were standing around, looking down at her.

‘I informed you that this lake was dangerous,’ the man was saying, but no-one was listening to him.

Maureen wondered if he knew why the lake was dangerous. She closed her eyes and remembered and began to cry.

They sat her up and gave her hot tea, and then an ambulance arrived and a nice young paramedic took her pulse and listened to her watery lungs and insisted she go to hospital.

‘I don’t want to see any of you here ever again,’ said the angry man.

Just before the ambulance doors closed, Maureen thought she saw a pale arm rise from the centre of the lake, and she imagined swimming with the mere-maid again.