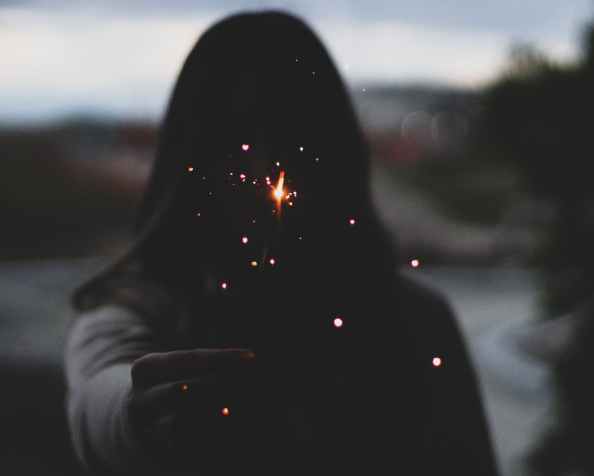 Out go the lights. At one pm all the side streets of the town are flicked into darkness. Few people are about, and fewer still as the night bears down. Even the town’s homeless population take refuge in the shelter which closes its doors at midnight. All the town’s doors are closed by midnight.

An occasional car drives by. No-one else is out except for the shadows.

On this particular night a woman was walking alone in the dark streets, head down, shoulders hunched, footsteps firm and rapid. She seemed wrapped about in something darker than the night, and not concerned with whatever might be watching her. And there was something watching her.

As she walked, movement sensitive porch lights flashed on here and there. The follower avoided these pools of light. He stalked her through the streets, getting closer as they walked. She was so small a morsel, so slight, and so tempting.

The follower made no sound. He wondered where this woman was going at this hour of the night. The night folded around them. A cat crossed the pavement in front of the woman, froze, then fled.

A certain familiar shadow cast across the woman’s path but, like the cat, it did not stay to trouble her.

The follower lost patience with his curiosity. Hunger overrode his interest in the destination of his prey and he became less cautious in his pursuit, speeding up and not concerning himself about the few intermittent light sources.

She heard him. He saw that she did by the slight stiffening of her shoulders and the way that she, too, quickened her pace. Feeling his own power and the greater length of his stride, he easily closed the distance between them. Now he could tell that she was wearing a dark hooded garment.

He was almost on her when she stopped and turned halfway towards him. This was unexpected. Prey usually tried to run for it, that was half the pleasure. He stopped too, hesitating.

Her voice was clear, but small, almost as if it came from very far away — perhaps from the other end of a long, silent tunnel.

He laughed, and took a step closer.

She should have started to run, then he would be on her in a moment, but instead she began to turn slowly all the way towards him. He felt an unaccustomed sense of unease. Her face was invisible in the cover of the dark hood.

Against the urging of a primal fear, he stood his ground, sure that he was the one to be feared. He laughed again, and came on towards her.

He was far too close when he realised that she had no face, that she was not a woman at all.

Beneath the hood there was a pit of the most profound darkness. If he had shone a torch into it, all the light would have been swallowed up, never to escape.

Now it was too late. He stretched like a string of melted cheese, pulled long and taut, sucked forward into that inexorable darkness. There was a screech, then silence.

The woman pulled the hood closer about her, turned, and walked on, resuming her endless journey, always ahead of the dawn.