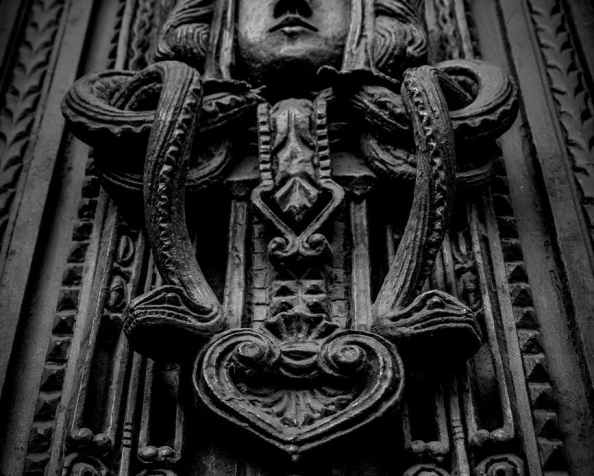 I almost ran into it the first time.

Almost every morning, about five forty-five, I get up, drag on my running gear and go out into the nearly empty streets. Running so early has two advantages. My resistance to exercise has not built up yet, because I’m hardly awake, and there are not too many people about to witness my un-athletic, red-faced, panting attempts to grasp at that elusive thing, fitness.

It was February, cold and dark. I was running at my top speed, which is not too fast, and suddenly there was something right in front of me. I pulled to a stop, nearly falling over, right in front of a door standing in the middle of the pavement, facing me.

First I thought who left this here? I could have hurt myself. Then I thought, how is is standing up? I walked around to the other side and it was not there any more. I could see back the way I came, all along to the end of the street. No door.

I stepped back, and there it was again — a black-painted solid wood door with a brass doorknob and an elaborate knocker in the form of grim face looking out at me, such as you might find on a grand Georgian townhouse. It was very substantial and real, but from the other side it simply was not there. I checked two or three times. There, and not there.

I laid the palm of my hand flat against its real, hard surface. The black paint felt warm against my skin, and I was suddenly terrified. I turned and ran all the way home at a speed I had never before achieved.

You don’t like to tell people about things like that, do you? They won’t understand, and they might think you’re suffering from the onset of schizophrenia. I did tell Janice, who works in the office next to mine, but I said it was a dream.

‘What do you think it means?’ I asked.

‘Maybe you should have knocked?’

‘Would you have knocked?’

‘Probably,’ she said, and laughed. ‘Knocked and run away.’

By the end of the day the whole thing had faded out, been leached of its reality by the mundanity of the actual world, and I was convinced it must have been some sort of waking dream. I was up too early, still sleepy, not quite awake. Somehow I had seen a door propped up on the pavement and my sleepy brain added a layer of weirdness onto something a bit out of the ordinary and unexpected, but ordinary really. Just a door.

On my way home I walked down that street, a quiet one with houses on one side and the park on the other, looking for the door, but there was no sign of any door not attached to a house. Even the house doors were nothing like the rather grand one I had seen.

Oh well, I thought, they took it away. No-one would leave it like that all day, would they? Blocking the pavement. There would be complaints.

The next morning I did not go running. I woke up with the alarm, but the idea of going out there gave me the shivers. It was too cold, I decided, and too dark.

March blew by, and then April came, with lighter warmer mornings. I started to wheeze going upstairs, and, though I have never liked running, I like breathlessness much less, so I got out my kit and one sunny morning I was on the streets before six.

When I came to the street by the park I almost changed my route, but I like running down there, with the trees overhead and birds singing. Some of the trees were full of blossom, and it almost felt like running in the countryside. No door blocked my way and I relaxed and almost started to enjoy myself.

I was nearly three-quarters of my way round my circuit when I saw it ahead of me.

This time I was not taken by surprise. Slowing to a walk, I came right up to it.

It was the same door. Glossy black paint, no number, just the brass knocker and doorknob. I looked around for the joker, the one who was watching me and having a good laugh, but there were no signs of life anywhere about. Everything was very quiet, very still.

I got scared, and that made me very angry. Without thinking, I grabbed the knocker and gave it two hard raps. The sound echoed as if there was a great, resonant space behind the door. After the sound died away I thought I heard sounds of movement coming closer from within, shuffling, sliding.

Got you, I thought and jumped to one side to see who was there. There was no-one, but the sounds were getting closer, then they stopped. Movement caught my eye. The doorknob began to turn.

I may have squealed. I certainly ran away. I did look back as I ran, and saw the door starting to open.

These days if I go running I go at lunchtime in the crowded park, like everyone else. Sometimes, early in the morning, I look out of my window and I can see the black door sitting on the pavement, waiting for me. It is standing just slightly ajar, a thin sliver of darkness behind it.

One thought on “The Door”