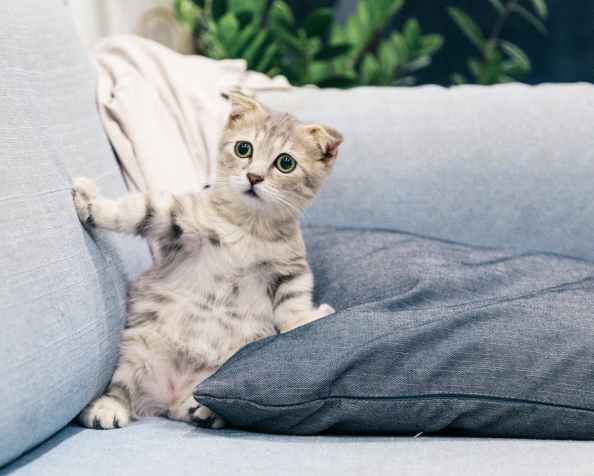 First it was a scratching at my door. It left claw marks. I thought it was the cat.

Then it shuffled along the hall. I thought it was the cat, then realised that she was under the sofa, hissing.

It started moving things about in the kitchen. I blamed the cat, until the day I saw my favourite mug shoot from one end of the work surface to the other and smash against the wall. the cat was watching too, from outside the kitchen window.

Next, as I walked downstairs, it ran up. I felt the cold wind of it passing right through me. There was no blaming the cat for that. She sat at the bottom of the stairs looking up at me with her head tilted to one side, as if she was thinking.

One night, about midnight, the covers were pulled right off my bed. The cat yowled. She’d been sleeping peacefully. So had I. I yowled too, and turned on the light. Nothing there but a cat with all her fur standing on end and her tail straight up.

Something started winding a figure eight around my legs while I was washing up the breakfast things. I thought it was the cat, but it felt a little chilly, and when I looked down, there was nothing to see.

I looked for the cat everywhere, but I couldn’t find her. By the end of the day I was worried enough to start making a ‘Lost Cat’ notice on my laptop.

‘Smuggins’, it said, with a photo of the lady herself, long haired tortoiseshell with green eyes, quite the beauty. My phone number underneath. ‘Lost. Please help me find her.’ I was about to print a few copies, but every time I turned the printer on, it turned off again.

Out in the back garden I called her name over and over, and waved an open can of red salmon. There was no sign of her.

That night at about midnight, something jumped up onto the bed.

She curled up in her usual spot. She felt rather cold. Half asleep, I thought she must have been outside for a long time.

In the morning, she was not there, but there was a depression in the duvet where I had felt her.

I called about the house for her, to no response.

I put out her food, but it lay uneaten.

In the evening, an invisible chill curled up on the sofa next to me, and we watched television together. It came to bed and slept in Smuggins’ spot.

Occasionally it knocks things off the shelves, and sometimes brings in a dead bird.

Smuggins, I found out, has moved in with a old lady down the road. I don’t blame her at all.