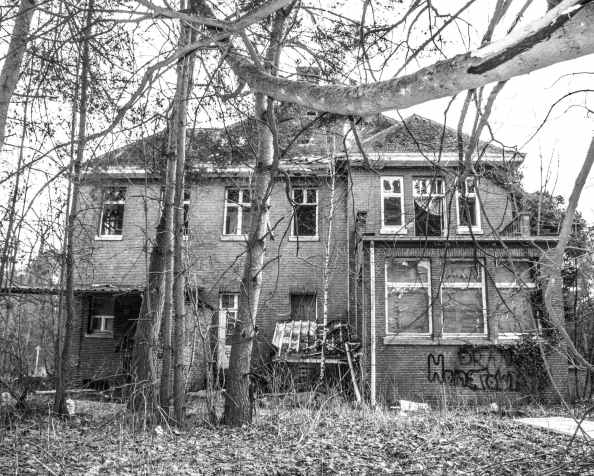 Some houses can be a difficult sell. This one ought to have been easy enough, even though it hadn’t been lived in for years, maybe decades. The garden was an overgrown mess, but it was large, and the house was surprisingly sound, even its windows were unbroken. It was filled with dark old furniture, and many spiderwebs, but if he talked up its potential once renovated, Chris was sure he could sell it pretty quickly.

The trouble was that no-one was listening to him. They all seemed to be listening to something in the house instead, but it was something that he could not hear.

Elaine Cook was the first of only two viewers that day, and following company policy, he could not be alone in the house with a single female viewer.

‘It’s all open,’ he said, ‘except the attic. Don’t try to go up there because we aren’t sure if the floorboards are sound.’

‘Aren’t there any women working at your agency?’

He smiled and ushered her in, saying he would be outside in his car, parked next to hers, if she needed to ask anything. He did not tell her that none of the other agents wanted to come anywhere near the house, calling it disturbing to be around. Chris was not disturbed. It was a really nice house, he thought, or it would be, once its potential was realised.

He sat in his car, working on his laptop while he waited. An hour went by. The next viewers pulled up in their car. Chris went to the front door and called, ‘Ms Cook?’ There was no reply. He asked the waiting couple to be patient for a moment, and he went in calling her name over and over. Every room was empty, except for the furniture. Desperate, he started to look inside the cupboards and wardrobes. He looked in the out-of-bounds attic. Then he looked everywhere again.

The couple waiting were looking at the house in a very doubtful way, even before he explained the problem. They could go in, he said, while he continued to search, but they were not keen.

Once Chris had combed through the garden, he lost hope and called the office, then the police.

Ms Cook had vanished, and his other potential buyers disappeared, but in a more normal way, in their car.

The police made an even more thorough search, and they questioned poor Chris very closely, suspicion in their eyes.

Three days later, a neighbour saw an exhausted and shoeless woman walking down the driveway of the old house. Elaine Cook had returned.

She told the police a very odd story, and word got about that she had been subject to some sort of fugue episode. Intrigued, I asked her for an interview.

This is what she told me.

‘I loved the house at first sight, even though it was so run down. I wandered around, looking at all the old furniture, thinking if there was any I might want to keep. There wasn’t much, to be honest, and everything was covered in old spider webs, like grey sagging lace. It was going to be a lot of work, but I could just feel that I wanted to buy the place, if I could get it at the right price.

‘I took measurements and made notes, then I thought I would go outside and see if I could get a view of the roof. If that was sound, I would pay a surveyor to look at the place.

‘Coming back downstairs, I noticed a door I had missed before, I don’t know how. It was just along from the front lounge.

‘Opening the door, bright sunlight blinded me for a moment. When I could see, the room was full of people, as if a party was going on.

‘You can imagine that I was puzzled. No-one had mentioned to me that there was anyone else in the house. They were all looking at me. I apologised and turned to leave, but the door was shut and seemed to be jammed.

I turned around, and they were all smiling at me. It was really disconcerting, but I didn’t want to upset anyone.

‘The woman who spoke offered me a cup of tea. I felt unable to refuse, so I took the cup, and sat down when others moved along the sofa to make room for me. I remember noticing that the furniture was much nicer in this room, and not dusty at all. There was a smell of lavender and everyone was dressed in costume, like some sort of Victorian re-enactment society.

‘It gets a bit blurry after that. Maybe there was something in the tea.

‘It was a beautiful garden, filled with flowers, not at all what I had expected from the front of the house.

‘I started to think that I should go and find the estate agent, but they pulled me this way and that, look at the apples, the pears. They showed me the house, and it wasn’t at all the way it had been, dark and dusty. It was bright and colourful, just the way it had been in my imagination.

‘After a long time, maybe a couple of hours, I was really tired, and they all said “goodbye, come again” and they were gone.

‘I’d lost my shoes, I don’t know where or when. The house was dark again. The front door was locked, so I had to get out through a window, and then I found that my car was gone.

‘They said I was missing for three days, but that doesn’t seem right. Nobody believes what happened to me, but I have decided not to care any more.’

‘Even after all that, you decided to buy the house.’

‘Yes. The renovations are coming along well, don’t you think?’

I looked around at the bright, airy sitting room

‘Is this the room you saw all the mysterious people in?’ I asked.