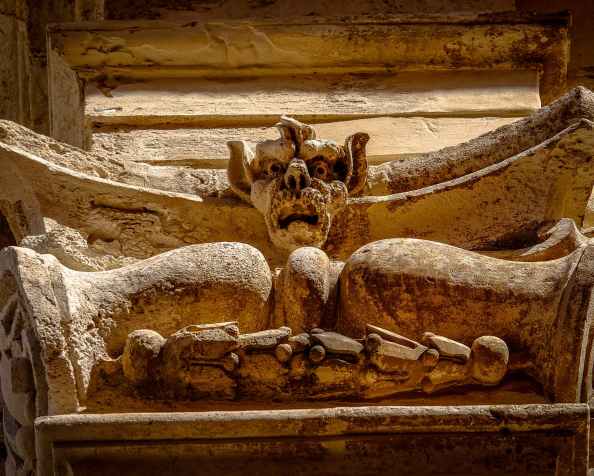 It is an old house, built in parts over hundreds of years. We bought it cheaply because no-one had lived in it for decades, and we couldn’t afford anything but a wreck to fix up.

After almost a year’s work on the place, we decided that it was time to tackle the big back bedroom. There were layers and layers of paper on the walls, I’d never seen so many. The top layer was floral paper from the 1970s, turquoise and green, absolutely hideous, and made worse by the large weird stain stretching over almost half the wall, like a faint scorch mark. Alys said it looked like an unfriendly bear, and that the whole room was giving her a headache.

We got that layer off easily. It peeled away and underneath was a 1950s paper with a geometrical design. It was like wallpaper archaeology. The stain was on this one, too, but darker. We were worried that there was a fungus problem with the wall underneath, though it seemed dry.

The next layer was a horrible brown paper, nearly the same colour as the stain, which was still there, but disguised in the nasty murk of the wallpaper. It looked to me as if someone had deliberately chosen that colour to hide the stain in plain sight. That paper had a kind of varnish over it and was not so easy to get off, so we called it a day.

In the morning there was an odd smell in the house, a faint burnt odour, hard to pin down the source. We opened the windows and carried on.

After the brown paper, which took us a couple of hours to get off, the rest of the layers came away easily, and the last one was a beautiful hand painted Chinese-style paper, with a blue ground, covered with trees, birds and butterflies. We think it is 18th century. It, too was spoiled on that one wall by the horrible stain, now really dark and unpleasant. We decided to keep that paper everywhere except the stained wall, and to go for an antique look in the room.

Nervous about the damage we would uncover on that wall, we took a break.

The burning smell had got a lot stronger, even though all the windows were open. Alys thought it might be the wiring, and she called our electrician. He came over right away, and searched the whole house, looking for hot spots with an infra-red detector, testing the wiring, everything he could think of, but he found nothing.

The next day we had to carry on with the redecorating while we had the time, so we just opened the windows and ignored the smell.

Starting to peel off the last layer of paper was strange. We wanted to see what was underneath, but were also really nervous about what we might find.

The paper started to crumble as we pulled it down, and we soon saw that what was underneath was not a stain, but a painting.

Well, it is the most horrible thing. A monstrous dark creature, somewhat like a bear, but not any real animal that I know of. It is chewing and trampling on naked people, a deranged look in its red eyes, blood spraying everywhere, and surrounded by strange symbols. I wanted to paint over it, but Alys said it was probably very old, so we got the people from the Shuckleigh Museum to look at it. They were very excited. They couldn’t date it, but did say they had never seen anything like it, that it was unique.

Since we uncovered it, neither of us have been able to sleep – if we do, we dream of appalling things that I do not want to talk about. And the screaming, can’t you hear it? All the time.

Alys is staying with her parents. I’m living in the kitchen for now, because it’s the room furthest from the painting, but the screaming and the smell of burning still keeps me awake.

There is a constant stream of weird people wanting to see the thing, but I think they’re taking nightmares away with them.

The museum people are upstairs now. We are donating it to them, and they think we are being wonderfully generous. They are taking it down in one piece, but it’s such a long process.

Alys says it is the best thing to do, but I feel guilty about passing this damned painting on to someone else. It isn’t just paint and plaster, but a dreadful intention, and I fear that some of the blood may be real. I only hope it will be kept in a locked room.